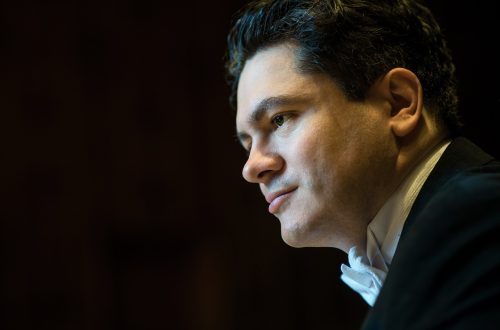 He is the most insightful and serious young conductor out there today.
The Chicago Sun Times, Andrew Patner

What makes Macelaru impressive is the huge sound he gets from the orchestra. He sought boldness, as though wrapping the hall in a thick, heavy velvet Rachmaninoff bow that implied a gift of some extravagance and possibly decadence. For the Symphonic Dances, Macelaru further increased the dosage of orchestra steroids. Even so, details came through well. The rich string playing and wind playing may have been inspired by Macelaru’s work with the Philadelphia Orchestra; the brass blowout had the Chicago Symphony written all over it. The L.A. Phil responded spectacularly.
Los Angeles Times, Mark Swed

The conductor, who impressed last summer when he conducted Cincinnati Opera’s “Il Trovatore,” impressed once again in Elgar’s “Enigma” Variations. This work, which concluded the evening, was given as fresh and inspired a performance as one could want. Each of the 14 variations – in which a friend of Elgar’s is depicted – had distinctive character, ranging from delicate to blustery. The musicians responded to the conductor’s leadership with polished, expressive playing. Of course, its heart is the “Nimrod” Variation. Here, the conductor began almost imperceptibly, and allowed the music to unfold simply, to its noble climax. The effect was quite moving..
Cincinnati Enquirer, Janelle Gelfand 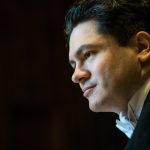 Currently in his first season as Chief Conductor of the WDR Sinfonieorchester, Cristian Măcelaru is one of the fast-rising stars of the conducting world. He was recently appointed as Music Director of the Orchestre National de France in Paris, one of Europe’s leading orchestras, and will begin this position in September 2021.

In January 2020, Măcelaru received his first-ever GRAMMY® Award for conducting the Decca Classics recording of Wynton Marsalis’ Violin Concerto with Nicola Benedetti and the Philadelphia Orchestra.

Summer 2020 will commence Măcelaru’s first season as Inaugural Artistic Director and Principal Conductor of the World Youth Symphony Orchestra at Interlochen Center for the Arts. It will also mark his Fourth season as Music Director and Conductor of the Cabrillo Festival of Contemporary Music, the world’s leading festival dedicated to contemporary symphonic repertoire. He leads premiere-filled programs of new works by an esteemed group of composers. Among the 2020 season’s highlights are a dozen composers-in-residence including Sean Shepherd who premieres a new work for the Festival.

Cristian Măcelaru attracted international attention for the first time in 2012, when he stepped into the breach with the Chicago Symphony Orchestra, deputizing for Pierre Boulez. In the same year, he received the “Solti Emerging Conductor Award” for young conductors, followed in 2014 by the “Solti Conducting Award”. Since then, he has performed regularly at the podium of the best American orchestras, including the Chicago Symphony Orchestra, New York Philharmonic, Los Angeles Philharmonic, Cleveland Orchestra, St. Louis Symphony and National Symphony Orchestra. A particularly close collaboration connects him with the Philadelphia Orchestra: Since his debut in April 2013, he has been on the podium of this orchestra over 150 times and served there for three seasons as Conductor-in-Residence.

Cristian Măcelaru was born in Timișoara, Romania and comes from a musical family. As the youngest of ten children, he received instrumental lessons at an early age – like all his siblings – in his case on the violin. His studies took him from Romania to the Interlochen Arts Academy in Michigan, University of Miami in Florida and Rice University in Houston, where he studied conducting with Larry Rachleff. He then deepened his knowledge at Tanglewood Music Center and Aspen Music Festival in masterclasses with David Zinman, Rafael Frühbeck de Burgos, Oliver Knussen and Stefan Asbury.

Măcelaru was the youngest concertmaster in the history of the Miami Symphony Orchestra and made his Carnegie Hall debut with that orchestra at the age of 19. He also played in the first violin section of the Houston Symphony for two seasons.

Cristian resides in Bonn with his wife Cheryl and children Beniamin and Maria.

* in collaboration with Primo Artists